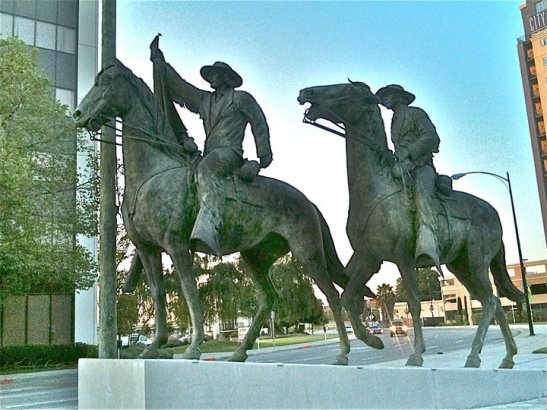 [File photo] “Fallon on Horse”: A once controversial statue of Thomas Fallon, now on display at Pellier Park, a small triangular area where West Julian and West St. James streets merge. See the picture of the Fallon House for more history about Thomas Fallon. In 1991 this statue was subject to protest by some Chicano/Latino activists who claimed that Fallon captured San Jose by violent force in the Mexican-American war (1846). The account has been contended and some believe that it was actually a small band of some 20 men or so that led the victory somewhat undramatically, although with tremendous significance. At any rate, Fallon represents an “imperial” legacy to some natives of the area, so the statue was hidden in storage for several years, before it was removed and placed here in the year of 2002. Actually, what may have been more significant and controversial was Fallon’s rule over the city in the aftermath of his victory; that is, considering his relationship with the city’s “Californio” (early Spanish or Mexican) residents and even his own wife.