The City of San Jose’s historic Fallon House was open for a tour on the celebration of San Jose’s 240th birthday.  Observed last Saturday, 19th November, the official date is technically on November 29, 1777.

San Jose was originally founded in California as El Pueblo de San José de Guadalupe, and the Fallon House is today managed by History San Jose along with the Luis Maria Peralta Adobe as one of two significant landmarks in downtown’s San Pedro Square Market area.

The modern city is named after Saint Joseph of Guadalupe and was founded by José Joaquin Moraga as the first pueblo (town) in what was then upper Las Californias, the colonial northwestern-most area of New Spain (a viceroyalty).  Moraga completed the work set out by Juan Bautista de Anza, an explorer of New Spain, as well as the Governor of Nuevo México (Spanish New Mexico).

[The Founding of the City of San Jose, Celebrating 240 Years at the Peralta Adobe & Fallon House, de•Anza Post, Monday 20 November 2017]

The Peralta Adobe was built earlier before the year 1800 (circa 1797), whereas the Fallon House was built later in 1855 by one of San José’s earliest mayors.  Today, the two buildings still stand just across from one another on St. John Street [here].  They are adjacent to the market square that wraps around the corner from St. John Street to North San Pedro Street.  This is as much a historic part of San Jose as it offers outdoor seating in a hip and vibrant atmosphere of contemporary retail shops.

Locals and visitors can enjoy food from diverse restaurants, cafes, and bars, while also appreciating some of the city’s and state’s earliest antiquity.   Two of San Jose’s oldest buildings are mixed in with a host of services, creating a scene that preserves a deep history, as well as one that’s developing with new high-rise towers around it.    Come here to find an interesting mix of locals, students, business people, politicians, community figures, and even convention travelers and tourists.  The San Pedro Square has become the place for a morning coffee, an afternoon lunch, cocktails, or an evening dinner and entertainment.

Scheduled tours inside the Peralta Adobe and the Fallon House are often listed on the website of History San Jose and its events calendar, but visitors can easily see many of the landmark features from the outside.

The Fallon House approached from the St. John St. entrance. Enters the kitchen, not the front door. 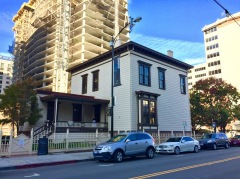 The Fallon House is across from the Perallta Adobe on St. John St.

De•Anza Post covered the Peralta Adobe in one of its previous posts, but let’s take an inside pictorial view of the Italianate style mansion known as the Fallon House.  It showcases 15 fully furnished rooms, much of its decor refurbished with Victorian period antiquities, although they are not original artifacts of Thomas Fallon and his wife, Carmel.

The house is named in memory of the frontiersman in the John C. Fremont expedition, Thomas Fallon, the tenth Mayor of San Jose.

[File photo] “Fallon on Horse”: A once controversial statue of Thomas Fallon, now on display at Pellier Park, a small triangular area where West Julian and West St. James streets merge. See the picture of the Fallon House for more history about Thomas Fallon. In 1991 this statue was subject to protest by some Chicano/Latino activists who claimed that Fallon captured San Jose by violent force in the Mexican-American war (1846). The account has been contended and some believe that it was actually a small band of some 20 men or so that led the victory somewhat undramatically, although with tremendous significance. At any rate, Fallon represents an “imperial” legacy to some natives of the area, so the statue was hidden in storage for several years, before it was removed and placed here in the year of 2002. Actually, what may have been more significant and controversial was Fallon’s rule over the city in the aftermath of his victory; that is, considering his relationship with the city’s “Californio” (early Spanish or Mexican) residents and even his own wife.

In his young adult years, Fallon lived in Texas, where he had joined Fremont’s expedition on the way to what was then known as Alta California.

By 1846, Fallon was stationed in nearby Santa Cruz, remaining in town after Fremont’s departure.   From there, he rallied together a group of 22 men in what became known as the historic Bear Flag Revolt.   Naming himself “Captain Fallon”, the men rode by horse across the Santa Cruz Mountains to capture the Pueblo of San José.

Under Fremont’s regional campaign, Fallon was associated with an unrecognized breakaway state that formed at the end of Mexican rule of this territory.  This is before California became part of the United States.

The revolt happened on July 11, 1846, without bloodshed.   Days thereafter, on July 14, an American flag — The Star Spangled Banner — was given to Fallon by Commodore John D. Sloat.   The flag of the United States of America replaced the Bear Flag at the juzgado of San Jose, what was then known as the pueblo’s administrative building.

Today’s official California “Bear Flag” , based on the original of 1846.

The modern flag of the city of San Jose.

From then, Fallon’s force met again with those of Fremont’s for the greater commandeering of Alta California, plus the various campaigns of the Mexican-American War.  The military gained control from Santa Cruz, San Jose, and northward to San Francisco.  Ultimately, they stopped at what is now Sonoma County.

The California Gold Rush began from 1848 and 1849, and Fallon traversed between San Jose and Santa Cruz, making money off the cargo of iron picks made in Santa Cruz, which in turn he sold to the gold miners coming in masses to the region.  Fallon also became quite established “over the hill” in Santa Cruz by the Monterey Bay.

Also in 1849, Fallon married Carmel (Carmelita) Castro Lodge.   Fallon was Irish born and Canadian raised, whereas his wife Carmel was the daughter of one of the most prominent Mexican landowners in California.    Thomas lived from 1825 to 1885, and Carmel from 1827 to 1923.

In 1852, Fallon sold his landholdings around Santa Cruz and moved to Texas with Camel; but, after the death of several of their children, they decided to return to San Jose and settle here.   Fallon bought land in the greater San Jose area and eventually built the Fallon House in 1855.

In posterity, Thomas’ and Carmel’s relationship has become the subject of hot gossip and speculation, because they had ultimately divorced.   Legend has it that in 1876 —after 26 years of marriage — Carmel actually found Thomas and the family maid in flagrante delicto… a compromising position.

She filed for divorce and went her separate way without him.  Carmel got a settlement from Thomas, and ultimately made an investment in real estate up in San Francisco, including a residential building on Market Street.  The place still stands as a historic landmark in the Noe Hill neighborhood, which is in relative walking proximity to the Castro District, an area named on behalf of her relatives.  Carmel’s residence in San Francisco now stands adjacent to and part of the San Francisco LGBT Community Center.

Although Carmel seemed humiliated by her husband’s shenanigans, she nevertheless carried on with dignity and enterprise, taking on a different life thereafter.  Her grandfather was General Joaquin Ysidro Castro, and her uncle, José Castro, had been governor of Alta California.  She carried that pedigree, even in the fall of the Spanish-Mexican order.

Carmel next became a successful businesswoman in the city of San Francisco, maintaining her own, while the house in San Jose was forgotten, and so too a womanizing husband.

What thereafter became of the Fallon House seemed like a long and sketchy history… but think again.  The turn of the century was on its way, but Carmel was still alive until 1923 when the San Francisco Bay Area scene, if not America itself, began a huge transformation.  (Indeed, she even lived through the great San Francisco Earthquake of 1906).

In generations of recent past, the old house in San Jose had become a popular icon of downtown hospitality, known as Manny’s Cellar, and this is how many old-time San Joseans had remembered the place, since (after all) they never knew Carmel and Thomas Fallon in their legendary days.  For about a quarter-century, many locals identified with the owner named Manny Pereira, who was the well-known patron of blue-collar workers, judges, lawyers and newspaper reporters.  It was down the steps — below the house — that everyone went for lunch, dinner or cocktails, and to be greeted by Manny.

For decades, The Fallon House was more known for what was downstairs, below ground, than what was locked upstairs in the house.  Known as “the Cellar”, the heat from the kitchen took rise through the floorboards into the upper building.

Indeed, even before Manny’s, many locals had not realized that the Fallon House served as a hotel and restaurant for much of its life, popular among early Italian immigrants during the Great Migration of the turn of the century.   The Fallon House not only got a lot of use…  but lots of wear and tear.

Remnants of the Italian heritage — including memories of its hospitality business — is non-existent.  In all the years, there has been no salvaging,  no reconstruction, and no memorial placed at the site.  Not even in the cellar — which is mostly kept closed nowadays — is there a homage to this “other” part of history under the house itself.

Before Manny’s Cellar, there was The Italian Hotel.  The poor immigrants arriving from Italy in the turn of the 1900s had found shelter in the rooms offered in the Fallon House, as well as in similar places nearby.  From here, single Italian men and their families stayed in-house under the hospitality of their fellow countrymen, comforted by the sharing of a common language, food, and culture.  From here, they found employment, earned their first wages, and they eventually went out to buy small farms and establish local businesses.

After World War II, the legend of the Italian Hotel was still in place, but young veterans had returned to San Jose to find a new establishment downstairs below the house.  Al Franzino and Al Visca ran a business known as the Italian Cellar that made homemade-style Italian dishes such as freshly made ravioli pasta, plus others dishes like polenta (an Italian, rustic-styled cornmeal porridge) served with tomato sauce and a cacciatore of chicken, rabbit, sausage, etc.

Operated by the local-boys-made-good, the Italians “Big Al” and “Little Al” had made a good life for quite some time.  They would wake early in the morning, working hard into the day; but, sooner or later, it all became too hard to manage.

When the business was failing, they decided to sell to Manny Pereira, and that’s when it was renamed Manny’s Cellar, including a liquor license, lots of old-time charm, and warm and fuzzy memories.

Eventually, Manny himself tired out, too, deciding to close the venue in 1990 when the city purchased the old relic and had new visions for its keepsake.

The old house Fallon house was remembered for its original stature and acquired under the tenure of Mayor Tom McEnry, who governed the city from the late 1980s to 1990s.  That is when the house and surrounding property was preserved and restored, ultimately to the status of a historical landmark.

The attached video in the below was made July 4th, 1981, and remembers the Peralta Adobe and Fallon House well before the historic restoration.  It shows that time when Manny’s Cellar was still around. Enjoy a bit more of the nostalgia… it’s a bit of a kick.